I first met Georgia McGovern and Sebastijan Jemec in August 2019 through an introduction from Vanesa Zendejas at A-Z West. The pair are an artist and architect/designer who were looking for a desert home for their project Terra Incognita. The project involves a series of site specific tents that rely on elements in the landscape to support the structure. The intent was to challenge people to go out into the landscape to spend time on their own, a wilding of sorts. The first of these tents was to be in Joshua Tree. 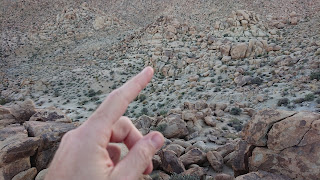 I was immediately interested in the project and agreed to host Georgia and Sebastijan for  series of research visits leading up the launch of their project. After the first of these trips in 2019, the pair decided on a location on BLM land in the rocks behind the Boxo residency. The site itself was akin to a cave in which the tent would be inserted - this gave it a wonderful protected sense and allowed for the rocks to serve as supports. 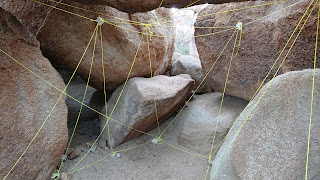 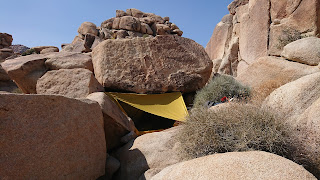 The initial idea was that Boxo would host the finished tent kit as well and have people check it out for a day. Then I had a conversation with a lawyer who assured me that people hiking over the rock pile, possibly unwittingly trespassing on neighboring properties, and the possibility of injury, was just too much risk. Apologetically, I had to withdraw the possibility of keeping the tent locally ad we determined that the tent could be checked out through the mail and that the recommended hiking route would be from a conservation area to the south of the site. 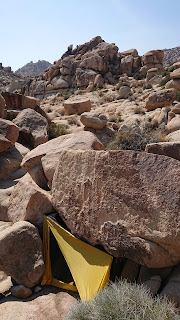 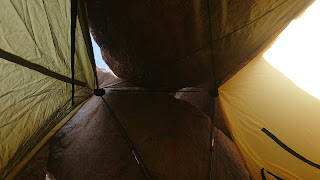 After a couple of research trips, including one cross country trek during the pandemic, Georgia and Sebastijan were ready for the launch. We had originally planned an installation in the studio which would launch a hiking party to the site. However, the pandemic put the cabosh on that. Instead, a launch hike with overnight camping was scheduled in April, 2021 with a small group of friends, including Em Joseph, a filmmaker. Em captured the experience as well as some supplemental footage and edited a wonderful short film that contextualizes the project. In October, 2021, Georgia and Sebastijan introduced the project over zoom with a showing of the film and a conversation. 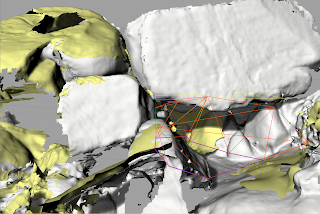 Many thanks to Georgia and Sebastijan for bringing Tera Incognita to Joshua Tree and to Boxo and I look forward to witnessing future iterations of the project.

Posted by Bernard aka Boxo at 6:05 PM