Kelly Berg’s paintings explore natural phenomena and landscape and express a world that is simultaneously futuristic and primordial. Her work captures the movement of tectonic plates and the growth of geological formations. An ongoing series of paintings feature smooth sided pyramids emerging from cracked ground and she states: “The pyramids rising up through the cracking earth signal something new and powerful is emerging from darkness and destruction. Ultimately from these dark and foreboding crevasses and cracks, something new and optimistic can be born.”

When Kelly and I got talking about a residency, she told me that she would like to push the rift paintings further by fabricating actual pyramids at various scales and then placing them in the "unsettled landscape" of the Joshua Tree rocks. She wanted to photograph these installations and then bring the process full circle by making paintings inspired by the photographs. 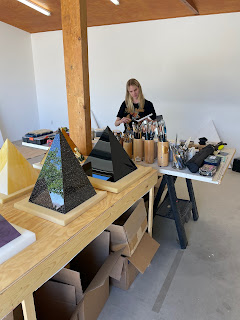 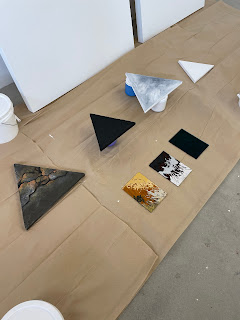 Kelley arrived in late April, just as optimism about vaccines and progress with the pandemic was in the air. She got to work immediately with a geological overview provided by Ranger Christian from Joshua Tree National Park. She also proceeded to place the pyramids in the landscape behind the studio and soon had some wonderful images. 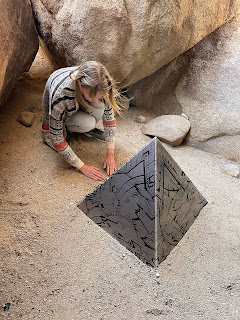 Several outings to the park followed, one with local artist Diane Best. Excursions to Giant Rock and Coyote Hole with Aimee Buyea and a trip out to Amboy Crater with me. Everywhere, the pyramids emerged from the landscape and interesting images and context were achieved. 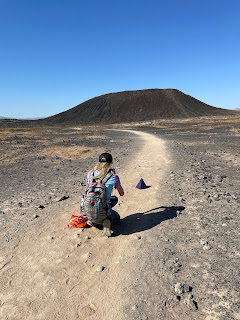 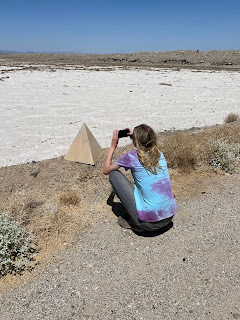 Kelly began the paintings early on too, using her signature style of painting a detailed black and white representation first and then taking time to layer many thin coats of color over and over. The paintings were at different scales and three were on triangular canvases. Soon a luminous presence emerged in the studio. The evolving exhibition incorporated finished works, works in progress, a selection of photographic works and a display of the pyramids themselves. 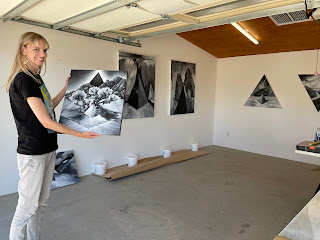 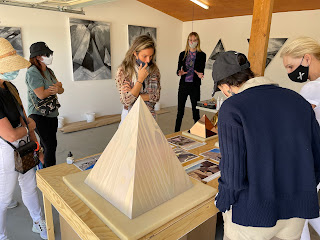 We were lucky enough to be able to host a well attended in person open house with the artist talk live streamed to a wider audience. A week of by appointment viewings followed to allow for anyone who was not comfortable yet in group settings. The residency finished off with a final open day. 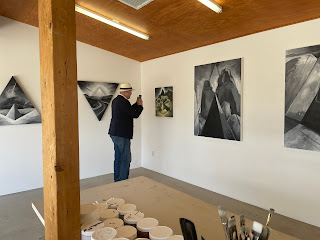 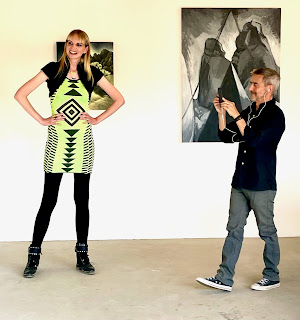 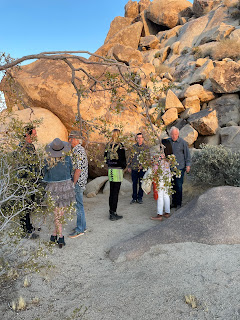 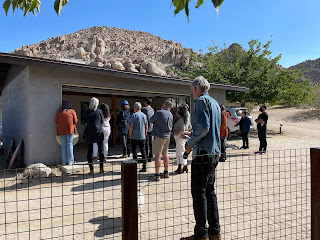 Many thanks to Kelly for all the preparation, hard work on site and for the captivating artworks that emerged.

Posted by Bernard aka Boxo at 6:39 PM